HERE-AND-NOW!
​This web page covers noteworthy developments largely impacting Americans, including our ability to govern as a Democracy!
​
​ 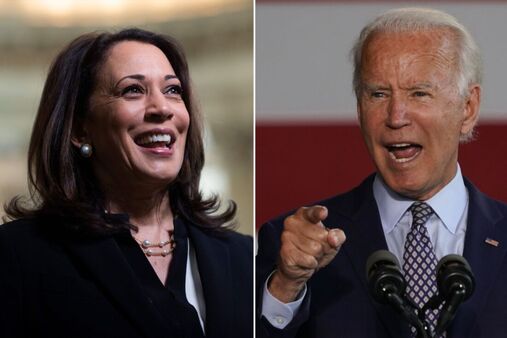 ​The 2020 presidential campaign of Joe Biden began on April 25, 2019, when Biden released a video announcing his candidacy in the 2020 Democratic party presidential primaries, and concluded with he and running mate Kamala Harris defeating incumbent president Donald Trump in the general election.

Biden, the vice president of the United States from 2009 to 2017 and a former U.S. senator from Delaware, had been the subject of widespread speculation as a potential 2020 candidate after declining to be a candidate in the 2016 election.

Biden is generally described as a moderate, although he has recently described himself as progressive. His positions include codifying Roe v. Wade into statute, a public option for health insurance, decriminalization of recreational cannabis, passing the Equality Act, free community college, and a $1.7 trillion climate plan embracing the framework of the Green New Deal. Biden supports regulation as opposed to a complete ban on fracking.

As a former vice president, Biden entered the race with very high name recognition. From his campaign announcement up to the start of the elections, he had been the candidate most identified as the Democratic front-runner. He led most national polls through 2019, but did not rank as one of the top three candidates in either the Iowa caucuses or the New Hampshire primary.

On February 29, 2020, he won a landslide victory in the 2020 South Carolina Democratic primary which reinvigorated his campaign. In March 2020, ten of his former competitors endorsed Biden, bringing the total number of such endorsements to 12. Biden earned enough delegates on Super Tuesday 2020 to pull ahead of Senator Bernie Sanders. On April 8, after Sanders suspended his campaign, Biden became the presumptive Democratic presidential nominee.

In June, Biden reached the required number of delegates to become the nominee. On August 11, Biden announced that Senator Kamala Harris would be his vice presidential running mate.

On August 18 and 19, Biden and Harris were officially nominated at the 2020 Democratic National Convention, making Harris the first Asian American and the first female African American to be nominated for vice president on a major party ticket. National opinion polls conducted in 2020 generally showed Biden leading President Donald Trump in favorability.

On November 7, four days after Election Day, Biden was projected to have defeated Trump, becoming president-elect of the United States.

The 2020 presidential campaign of Kamala Harris, the junior United States Senator from California, officially began on January 21, 2019, with an announcement on Good Morning America. Harris had widely been considered a "high profile" candidate for the 2020 Democratic Party presidential primaries since 2016.

Citing a lack of funds, Harris officially withdrew her candidacy on December 3, 2019. On March 8, 2020, Harris endorsed former vice president Joe Biden. Harris was chosen by Biden to be his running mate on August 11, 2020. Biden and Harris would go on to win the general election wherein Harris become the vice president-elect of the United States.

Voters selected presidential electors of the Electoral College who in turn will vote on December 14, 2020, to elect the new president and vice president.

This was the first election since 1992 in which an incumbent president failed to win re-election to a second term, and the first since 1960 in which the winning candidate did not carry bellwether state Ohio.

Both Biden and Trump received more than 70 million votes, beating Barack Obama's record of 69.5 million votes from 2008; with more than 75 million votes, Biden received the most votes ever cast for a presidential candidate in an American election. This is the first election in which Nebraska and Maine both split their electoral votes.

Trump secured the Republican nomination without any serious opposition, while Biden secured the Democratic nomination over his closest rival, Senator Bernie Sanders, in a competitive primary that featured the largest field of presidential candidates for any political party in the modern era of American politics.

Central issues of the election included the public health and economic impacts of the ongoing COVID-19 pandemic, civil unrest in reaction to the police killing of George Floyd and others and the future of the Supreme Court following the death of Ruth Bader Ginsburg and confirmation of Amy Coney Barrett.

The election saw a record number of ballots cast early and by mail, due to many states relaxing restrictions on mail-in voting in response to the COVID-19 pandemic. As a result of the large number of mail-in ballots, some swing states saw delays in vote counting and reporting, leading to major news outlets not projecting a winner until four days later on November 7.

During the election, on election night, and after Biden was declared winner, Trump and prominent Republicans made numerous false claims intended to cast doubt on the legitimacy of the election.

By November 7, Biden and Harris were declared winners by all major news outlets projecting the results, including ABC, the Associated Press, CNN, Fox News, NBC, The New York Times, and Reuters. Counting continues to determine the final results. Biden and Harris are scheduled to be inaugurated on January 20, 2021. Trump has not yet conceded.

Click on any of the following blue hyperlinks for more about the 2020 United States Presidential Election: