WHY OUR GENERATION USA? 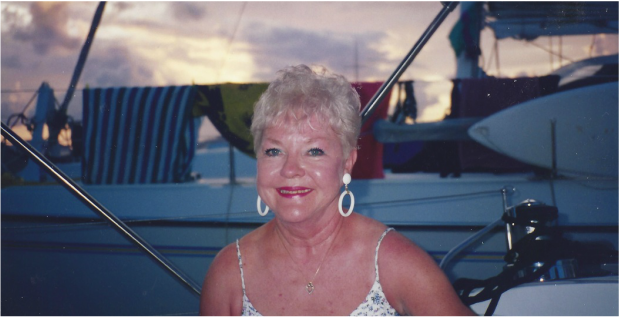 As a retirement hobby, your web host began developing this web site to cover all the best (and, in some cases, worst) about life in the United States, and for the Earth and Beyond!

There are three inherent benefits for visitors to this website:
Background:

The change in Society since the 1950s have been profound. Instead of Main Frame computers, we now have the ubiquitous "Smartphone" that you can hold in your hands, not only to make calls and send/receive  text messages, but to access the Internet (and this website!).

But perhaps the most profound development, certainly with Social Media (both good and bad as the United States learned from Russia's successful hacking of our 2016 Elections) is the development of the Internet, without which this website would not otherwise have been possible!

​The purpose of this website is to enable you to be taken “down memory lane” to recall what each decade has meant to you,  as the transformation of our country in becoming what it heterogeneously is today can be traced back to the (mostly peaceful) cultural revolution of American society beginning in the 1950s.

But, the website also offers the viewer options fitting his interests and generation. By doing so, the viewer can have as complete a history of each decade as he or she desires, including a mixture of time- and genre-appropriate content: e.g.,

For a little about your host, the Host views his role as "Your  Virtual Librarian" ("YVL"), by organizing and presenting most of the content from perhaps the greatest encyclopedia of all time: "Wikipedia" (as well as other web sources as relevant to each content topic).

And thanks to Weebly for hosting and enabling me to build this website, so that I can concentrate on content with minimal or no time spent on programming!

Prior to retirement, the Host had made a living in the magazine publishing field consulting for publishers  by helping them find the right printing arrangements as well as to optimize the value of their supplier arrangements.

In fact the Host was the first to use computers (then "microcomputers") in the publishing office, starting in 1981. In 1984, the leading magazine trade publication asked the host to  write a feature cover article about technology in the publishing workplace as well as articles/columns about supplier arrangements: this continued on until the Host's retirement in 2010.

For this same Publisher, your Host wrote the definitive book entitled "Working with a Magazine Printer" in 1984, which sold out to the publishing community.

But, no achievement has been greater than marrying Evelyn, who gave my life such wonderful and fulfilling meaning for the 35 years we were together, until her passing in 2008:

1972: We met in Maryland Heights, MO when I went to work for her employer: it was truly love at first sight.

1973: we were married by a justice of the peace on September 1, 1973: See picture below of Ev and I together on our wedding day: yes, it was the seventies!! 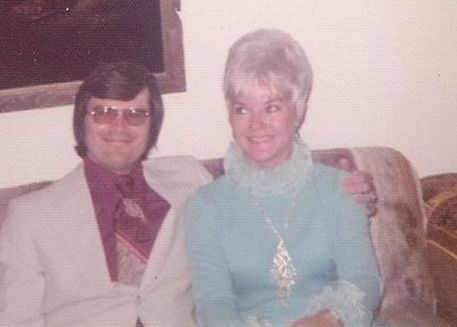 We then honeymooned in California by flying into Los Angeles, then renting a car and traveling up the coast, with the first stop in San Luis Obispo, CA, (where the Host had studied graphic arts at California State Polytechnic University (1961-1965)). We stayed at the beautiful honeymoon resort hotel "Madonna Inn", in the "honeymoon suite" as seen below: 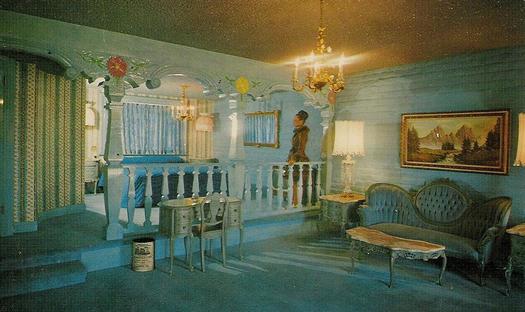 We continued the drive up the coast to San Francisco, where we then returned to Saint Louis and Maryland Heights, MO.

We lived together in metro St. Louis area, where the Host got to know and become close to Ev's family, who included the nicest, most open, and fun in-laws one could ask for!

1976-1978: Our employer moved us (along with the corporate offices) to Effingham, IL, wherein we had our house built in the country, in a wooded lot on top of a hill overlooking a running stream we could hear when the windows were open. The Host also designed the Living/Family Area per the pictures below: ​1978: Unfortunately, our last two winters in the area were so awful. given that we were unable during heavy snows to get our cars up to the house, as the snow-bound gravel driveway up a steep hill became too slippery. Instead, we had to literally crawl on hands and knees to get to our house.

It was on one such fateful day that Ev yelled at me as we were climbing up the hill "We are moving to California! And, so that following Spring in 1978, we packed up and moved!

However, because of my love for pets and knack for aquariums and with Ev's help, I came up with a business plan for opening a pet store we called "The Zoo" in that great town of San Luis Obispo, CA (SLO), where we had our honeymoon.

We both took a course in retail business at a local community college in Southern Illinois. We managed to find a buyer for the house who would contribute $8,000 as a down payment. On the basis of that capital, I applied for, and received, a $25,000 loan from the Small Business Administration for a retail pet shop in SLO.

We rented a Ryder truck that we, along with friends, packed up our belongings, and which the Host would drive, while Ev would drive our Chevy Monte Carlo with our two Miniature Schnauzer dogs. We began the trek to California. Notable occurrences during the drive was when we were separated by heavy late-afternoon commuting traffic in Tulsa, OK: we had CB radios to keep in touch and that saved the day.

Once we got to California, the mountain roads on the way to San Luis Obispo, CA included sheer cliffs below, and created vertigo due to my fear of heights (I couldn't see ground from my driver's side window), and I had to pause for awhile. But we made it to California.

Unfortunately, during the drive we were contacted by the realtor that the buyer of the house had lost his job, and would not be able to make the down payment we needed to secure the SBA loan, thereby eliminating our ability to start up the pet store.

Therefore, when we finally arrived in San Luis Obispo, we found an apartment in nearby Morro Bay. I worked in a sales for a local print shop called "Blake Printery". This led to a five month sabbatical in what I consider as the most beautiful resort area, encompassing the same nearby beach in Avila that I enjoyed while in college. We found an apartment in Morro Bay (with its huge volcanic rock). Just a short way across the coastal mountain range, the temperature jumped from the 60s (in Morro Bay) to over 100 degrees in Atascadero!

My Career Switched from Printing to Publishing:

The limited income from working for a printing trade shop, along with an opportunity offered by a printing sales associate in Los Angeles, enabled us to re-locate to West Hollywood. I worked as Director of Manufacturing for a publisher then known as East/West Network, which published in-flight magazines for major airlines, from 1978 until 1981.

In 1981, I became a full-time consultant when a publisher of RV magazines in Agoura Hills, North of Los Angeles, retained me to run their production department along with handling manufacturing and distribution arrangements with suppliers.

However, Apple priced the product very high, and other alternatives, based on open source code, began to emerge, culminating in the IBM PC using the Microsoft operating system. The client followed the Host's  recommendation to ultimately invest in what would become a 10-user LAN running Microsoft Office Software.
​
AND, the Host's career as a consultant served my desire to be with Ev at every possible moment by working from home whenever possible . This enabled us to enjoy the best in California life, including sailing the Pacific, especially Channel Islands.

And, we also for most of those years visited our favorite restaurants, including especially Butterfields, on Sunset Boulevard just across the street from the Comedy Store.

The restaurant was actually down a flight of stairs in a wooded outdoors seating arrangement, and that was devoid of street noise. Below is Ev with the Host and two friends at Butterfields:
​ 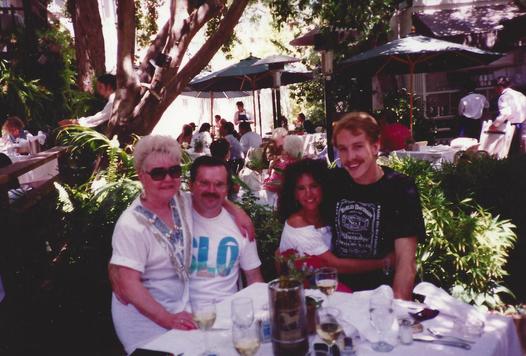 AND, we frequented other restaurants, first at Fish Shanty, which introduced us to the greatest entree ever: Abalone. Unfortunately over the years, Abalone became scarce.

But we also liked going to Dan Tana's also on Sunset next to Beverly Hills, and which had the best steak we ever had.

And perhaps the most famous restaurant of all was Ma Maison, where the very rich dined, with their Rolls Royce cars parked in front of the restaurant and at which the famed director and actor, Orson Welles, was a frequent diner: 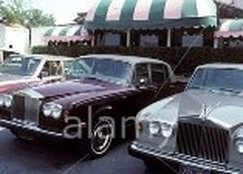 Our first and greatest passion, though, was sailing out of Channel Islands. First, though, we took sailing lessons from the California Sailing Academy located in the (very crowded and busy) Marina Del Ray:

Due to the (motor-less) Catamarans that tacked back-and-forth leaving and arriving in Marina Del Rey, we had to be careful to not be rammed. So, we joined Island Passages Sailing Club in Channel Islands Harbor up the coast in Ventura County:

There were a number of restaurants at the harbor. A usual day sailing trip was to leave the harbor by 1 pm (after the overnight fog had lifted), then return that evening before dark. We would then go to a restaurant ("Whales Tail" was a favorite), then retire for the evening by sleeping on the boat: it was so quite and peaceful, and we would pass the time first with some wine, then sleep in the bunks below.

A favorite festivity was the Annual Christmas Parade of Lights where boats would be decked out in a light show that would then tour through the harbor: 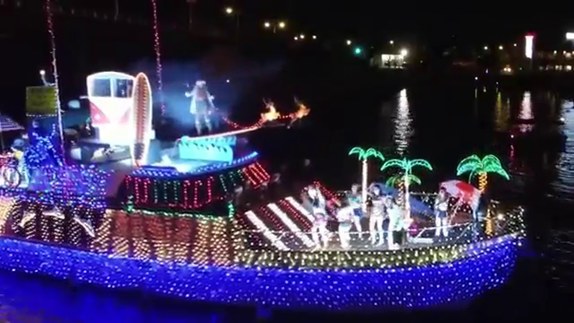 As a result, Ev and I were able to buy our "California Dream Home", in 1993. And, also in 1993, we took an extended vacation to the British Virgin Islands (BVI) by leasing a 54 foot sailing sloop from the International Moorings company who offered sailing trips to the more exotic ports of call throughout the world.

Below, see the picturesque Anacapa Island (the closest island to sail to in Channel Islands) and its arch, through which you can see catamarans sailing on the other side of the island: Thank you, Evelyn, for the best 35 years of my life! You are missed everyday....

Meanwhile, Your Host is fully retired now, but going to the gym 3x per week for keeping myself physically fit. (The Host started working out at gyms in September, 1961, and have continued every since: his father's side of the family had heart disease, for which my exercise has helped me to  delay the inevitable, as I am now in my mid-70s! For an idea of my 75-minute gym workout, click here)

Similarly, I started this website in 2012 in order to keep my mind sharp! I hope that you enjoy this 100+ web website about life in the United States as well as our role in a global society!