Actors who often play criminals/gangsters/scumbags/villains/terrorists
​
​Click here for more about Actors who have played bad guys. 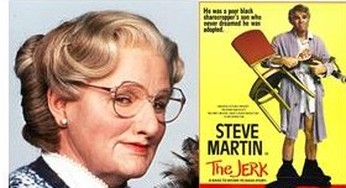 ​
It comes as little surprise if you think about it  but in order to understand the more painful and vulnerable aspects of the human condition  it helps to have developed a sense of humor as a coping mechanism first.

Click here for more about Actors who were Comedians. 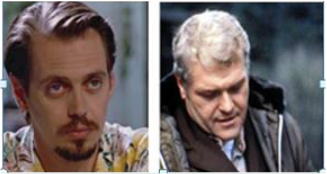 The term is used primarily to describe television and film actors. An early use of the term was in the 1883 edition of The Stage, which defined a character actor as "one who portrays individualities and eccentricities". Actors with a long career history of playing character roles may be difficult for audiences to recognize as being the same actor.

Commander James Bond  CMG  RN—code number 007—is a fictional character created by the British journalist and novelist Ian Fleming in 1952. The character appeared in a series of twelve novels and two short story collections written by Fleming and a number of continuation novels and spin-off works after Fleming's death in 1964. Seven actors have played Bond in 25 films.

Click here for more about Actors Who Have Played James Bond.

Oscar for Best Actor in a Leading Role
​YouTube Video of Al Pacino in "The Scent of Woman" considered as one of his most famous acting scenes
​Pictured: Al Pacino and Daniel Day-Lewis 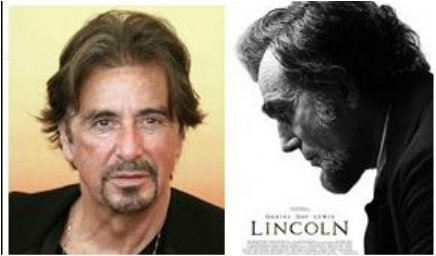 The Academy Award for Best Actor is an award presented annually by the Academy of Motion Picture Arts and Sciences (AMPAS). It is given in honor of an actor who has delivered an outstanding performance in a leading role while working within the film industry.

Since its inception, the award has been given to 78 actors. Daniel Day-Lewis has received the most awards in this category with three Oscars.

Spencer Tracy and Laurence Olivier were nominated on nine occasions, more than any other actor.

As of the 2015 ceremony, Eddie Redmayne is the most recent winner in this category for his role as Stephen Hawking in "The Theory of Everything" (2014 Movie). 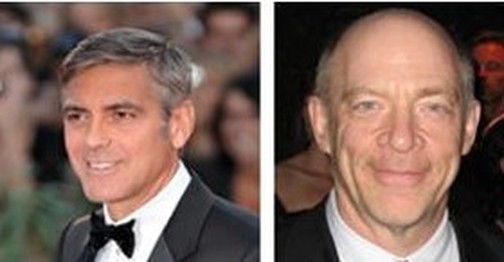 The Academy Award for Best Supporting Actor is an award presented annually by the Academy of Motion Picture Arts and Sciences (AMPAS). It is given in honor of an actor who has delivered an outstanding performance in a supporting role while working within the film industry.

Since its inception, the award has been given to 72 actors. Walter Brennan has received the most awards in this category with three awards. Brennan, Robert Duvall, Arthur Kennedy, Jack Nicholson, and Claude Rains were nominated on four occasions, more than any other actor. As of the 2016 ceremony, Mark Rylance is the most recent winner in this category for his role as Rudolf Abel in Bridge of Spies.

Click Here for More about The Academy Award for Best Supporting Actor. 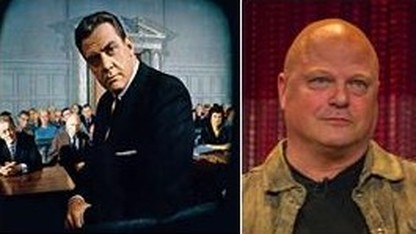 ​
This is a list of the Primetime Emmy Award for Outstanding Lead Actor in a Drama Series winners. Beginning with the 18th Emmys leading actors in drama have competed alone. However, these dramatic performances included actors from miniseries, telefilms, and guest performers competing against main cast competitors.

Click here for more about Primetime Emmy Winner for Outstanding Lead Actor in a Drama Series.

This is a list of the winners and nominees of the Primetime Emmy Award for Outstanding Supporting Actor in a Drama Series. In early Emmy ceremonies, the supporting categories were not always genre, or even gender, specific. Beginning with the 22nd Emmys supporting actors in drama have competed alone. However, these dramatic performances often included actors from miniseries, telefilms, and guest performers competing against main cast competitors.

Primetime Emmy Award for Outstanding Lead Actor in a Comedy Series.
YouTube Video of Judd Hirsch in Taxi
​Pictured: Carroll O'Connor as Archie Bunker in "All in the Family" and Jim Parsons as Sheldon in "The Big Bang Theory" 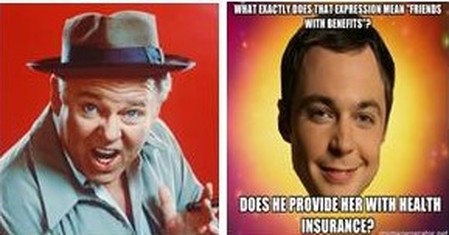 The Primetime Emmy Award for Outstanding Lead Actor in a Comedy Series is an Emmy presented to the best performance by a lead actor in a television comedy series. Beginning with the 18th Emmys, leading actors in comedy have competed alone. However, these comedic performances included actors from miniseries, telefilms, and guest performers competing against main cast competitors.

Daytime Emmy awards for Lead Actor In a Drama Series
YouTube Video of Christian LeBlanc and his role in "The Young and the Restless"
​Pictured: Macdonald Carey from "Days of Our Lives" & Anthony Geary from "General Hospital". 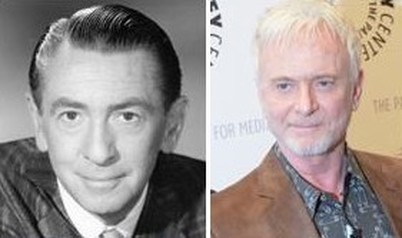 Since its inception, the award has been given to 24 actors. General Hospital has the most awarded actors in this category with a total of eleven wins. In 2008, Anthony Geary became the actor with the most wins. Geary went on to win again in 2012 and 2015, thus far winning on eight occasions.

As of the 2016 ceremony, Tyler Christopher is the most recent winner in this category for his portrayal of Nikolas Cassadine on General Hospital.

"The actors on this list are ranked according to their acting abilities, their success, their versatility, and the difficulty of the roles they've played throughout their careers.

To me, accuracy when making a Top 10/Top 100 all time list is extremely important. My lists are not based on my own personal favorites; they are based on the true greatness and/or success of the person, place, or thing being ranked.

My lists are also based on the opinions of experienced professionals who are involved in whatever I am ranking. For example, many professional and/or famous actors, directors, writers, and producers believe that Jack Nicholson is the greatest actor of all time.

Their opinions, along with Nicholson's versatility and record breaking success (awards & nominations), is why I ranked him at #1.

If you guys would like to view my other Top 10/Top 100 lists, feel free to check out my YouTube page and/or my IMDb page at "ChrisWalczyk55".

Emmy for Best Supporting Actor in a Comedy Series
YouTube Video of The Best Kramer Entrance from Seinfeld (The Soup Nazi Episode)
​Pictured: Art Carney in "The Honeymooners" & Brad Garrett as the older brother "Robert" in "Everybody Loves Raymond"

This is a list of the winners of the Primetime Emmy Award for Outstanding Supporting Actor in a Comedy Series. In early Emmy ceremonies, the supporting categories were not always genre, or even gender, specific.

Beginning with the 22nd Emmys supporting actors in comedy have competed alone. However, these comedic performances often included actors from miniseries, telefilms, and guest performers competing against main cast competitors. 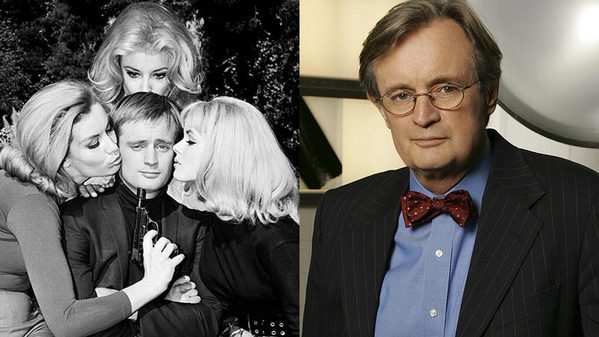 David Keith McCallum, Jr. (born 19 September 1933) is a Scottish-American actor and musician. He first gained recognition in the 1960s for playing secret agent Illya Kuryakin in the television series The Man from U.N.C.L.E.and as inter-dimensional operative Steel in Sapphire & Steel.

Click on any of the following blue hyperlinks for more about David McCallum: 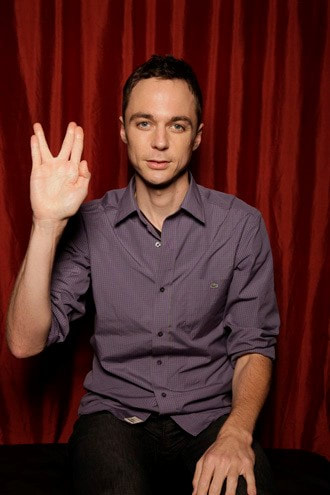 James Joseph "Jim" Parsons (born March 24, 1973) is an American actor. He is known for playing Sheldon Cooper in the CBS sitcom The Big Bang Theory.

He has received several awards for his performance, including four Primetime Emmy Awards for Outstanding Lead Actor in a Comedy Series and the Golden Globe Award for Best Actor in a Television Series Musical or Comedy.

In 2011, Parsons made his Broadway debut portraying Tommy Boatwright in the play The Normal Heart, for which he received a Drama Desk Award nomination.

He reprised the role in the film adaptation of the play, and received his seventh Emmy nomination, this time in the category of Outstanding Supporting Actor in a Miniseries or a Movie. On January 29, 2015, it was announced that Parsons would be returning to Broadway as God in the new play An Act of God, which opened in May 2015.

Click on any of the following blue hyperlinks for more about Jim Parsons: ​ 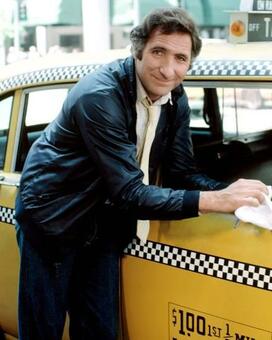 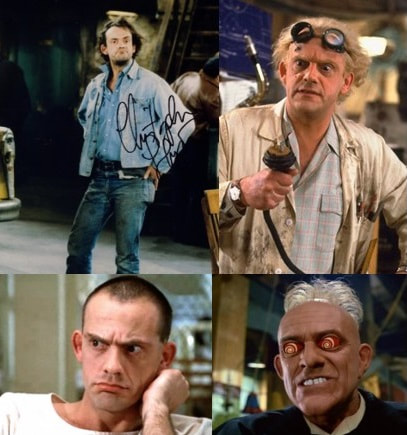 ​Christopher Allen Lloyd (born October 22, 1938) is an American actor, voice actor, and comedian. Lloyd came to public attention in Northeastern theater productions during the 1960s and early 1970s, earning an Obie Award and a Drama Desk Award for his work.

Lloyd made his screen debut in One Flew Over the Cuckoo's Nest (1975), and gained widespread recognition as Jim Ignatowski in the comedy series Taxi (1978–1983), for which he won two Emmy Awards.

Lloyd also starred as Emmett "Doc" Brown in the Back to the Future trilogy, Judge Doom in Who Framed Roger Rabbit (1988), and Uncle Fester in The Addams Family (1991) and its sequel Addams Family Values (1993).

Lloyd earned a third Emmy for his 1992 guest appearance in Road to Avonlea, and won an Independent Spirit Award for his performance in Twenty Bucks (1993).

Lloyd has done extensive voice work, including:
Lloyd has also been nominated for two Saturn Awards and a BIFA Award. 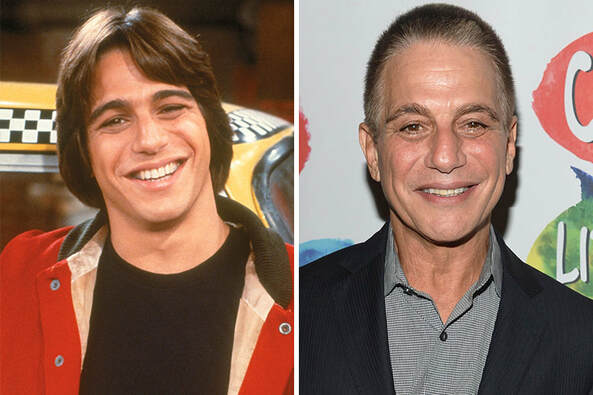 Danza is best known for starring on the TV series Taxi and Who's the Boss?, for which he was nominated for an Emmy Award and four Golden Globe Awards.

In 1998, Danza won the People's Choice Award for Favorite Male Performer in a New Television Series for his work on the 1997 sitcom The Tony Danza Show (not to be confused with his 2004–2006 daytime variety talk show of the same name).


Nathan Fillon Pictured below: Nathan Fillion is a Canadian-American actor who portrayed Mark Devereaux on Brooklyn Nine-Nine. He is known for his lead roles as Captain Malcolm "Mal" Reynolds in the FOX series Firefly and its feature film continuation, Serenity; and as Richard Castle on the ABC series Castle. He currently portrays Nolan on another ABC series The Rookie. 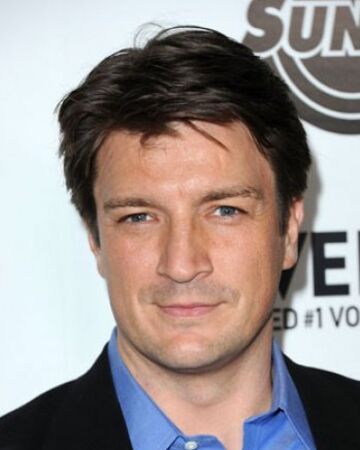 Nathan Fillion (born March 27, 1971) is a Canadian-American actor, best known for the leading roles of Captain Malcolm "Mal" Reynolds on Firefly and its film continuation Serenity, and Richard Castle on Castle. As of 2018, he is currently starring as John Nolan on The Rookie.

Fillion has acted in traditionally distributed films like Slither and Trucker, Internet-distributed films like Dr. Horrible's Sing-Along Blog, television soap operas, sitcoms and theater. His voice is also featured in animation and video games, such as:
​Fillion first gained recognition for his work on One Life to Live in the contract role of Joey Buchanan, for which he was nominated for the Daytime Emmy Award for Outstanding Younger Actor in a Drama Series, as well as for his supporting role as Johnny Donnelly in the sitcom Two Guys and a Girl.


LeVar BurtonPictured below: LeVar Burton Is A Living Legend, And Let's Not Forget It 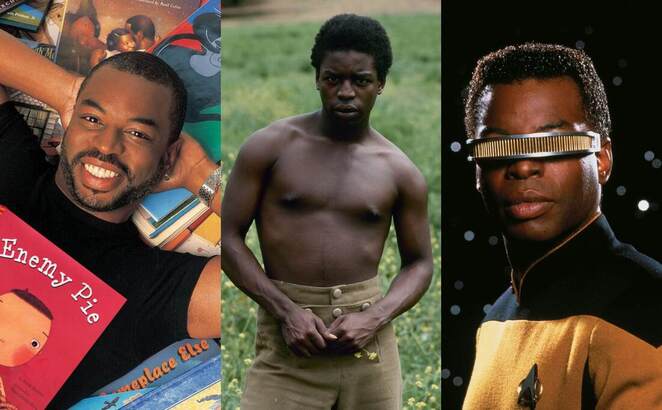 Levardis Robert Martyn Burton Jr.  (born February 16, 1957) is an American actor, director, and children's television host. He is best known for his roles as:
His other roles include:
Burton received the Grammy Award for Best Spoken Word Album at the 42nd Annual Grammy Awards for his narration of the book, The Autobiography of Martin Luther King Jr. In 1990, Burton was honored for his achievements in television with a star on the Hollywood Walk of Fame.


Paul ReiserPictured below: Paul Reiser:
TOP with Helen Hunt in "Mad About You"
BOTTOM with Michael Douglas in the "Kominsky Method" 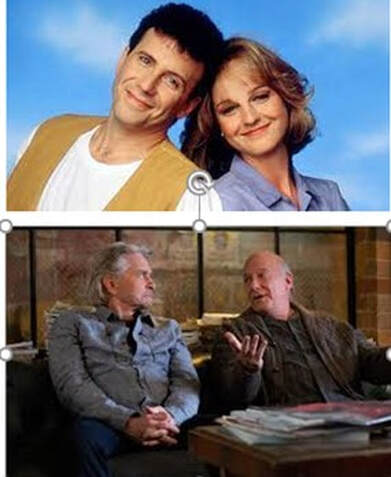 Paul Reiser (born March 30, 1956) is an American comedian, actor, television writer, and musician. He is known for his roles as:
Reiser is ranked 77th on Comedy Central's 2004 list of the "100 Greatest Stand-ups of All Time". The name of Reiser's production company, Nuance Productions, is inspired by one of his lines in the film Diner, in which his character explains his discomfort with the word "nuance".

Reiser also stars in the Netflix supernatural-horror series Stranger Things as Dr. Sam Owens. Reiser appears in the second and third seasons of The Kominsky Method as Martin, the boyfriend of Mindy Kominsky.