This Web Page covers
American Football
whether NFL or Other Pro/Amateur Football,
and
including the annual Superbowl.
​

​American football, referred to as football in the United States and Canada and also known as gridiron, is a team sport played by two teams of eleven players on a rectangular field with goalposts at each end.

The offense must advance at least ten yards in four downs or plays; if they fail, they turn over the football to the defense, but if they succeed, they are given a new set of four downs to continue the drive. Points are scored primarily by advancing the ball into the opposing team's end zone for a touchdown or kicking the ball through the opponent's goalposts for a field goal. The team with the most points at the end of a game wins.

A set of rule changes drawn up from 1880 onward by Walter Camp, the "Father of American Football", established the snap, the line of scrimmage, eleven-player teams, and the concept of downs. Later rule changes legalized the forward pass, created the neutral zone and specified the size and shape of the football.

The sport is closely related to Canadian football, which evolved in parallel with and at the same time as the American game (although their rules were developed independently from that of Camp's). Most of the features that distinguish American football from rugby and soccer are also present in Canadian football.

The two sports are considered the primary variants of gridiron football.

The National Football League, the most popular American football league, has the highest average attendance of any professional sports league in the world. Its championship game, the Super Bowl, ranks among the most-watched club sporting events in the world. The league has an annual revenue of around US$10 billion.

Other professional leagues exist worldwide, but the sport does not have the international popularity of other American sports like baseball or basketball.

Click on any of the following blue hyperlinks for more about American Football:

Six bowl games are currently part of the College Football Playoff, a selection system that creates bowl matchups involving twelve of the top-ranked teams in the NCAA Division I Football Bowl Subdivision. There are also a number of other college football postseason invitationals, as well as several all-star games.

For nearly a century, bowl games were the purview of only the very best teams, but a steady proliferation of new bowl games required 70 participating teams by the 2010–11 bowl season. With NCAA bylaw changes in 2010, teams no longer required a winning record (allowing any 6-6 team to participate), with a further change in August 2012 allowing teams with outright losing records (5-7) to be invited by the particular bowl's sponsoring agency.

For the 2015–16 bowl season, the number of team-competitive (excluding all-star) bowl games increased to 41 (including the College Football Playoff final game which matches two bowl game winners) requiring 80 teams to participate, of which 15 did not have a winning record.

Bowl games are not limited to the Bowl Subdivision; teams in the three lower divisions of the NCAA (the championship subdivision, and Divisions II and III) are also allowed to participate in bowl games.

The playoff structure in those three divisions discourages most high-caliber teams from participating in bowl games, as teams would rather contest for the national championship than play in a bowl game. The same basic guidelines for bowl eligibility apply for those contests.

As of 2015, one bowl game exists for the championship subdivision, three bowls serve Division II and none exist for teams in Division III (with the exception of the Stagg Bowl, which is not a bowl in the same sense but a name for the Division III playoff tournament's championship game).

Past and present community college bowl games, not sanctioned by the NCAA, are also listed.

The NFL's 17-week regular season runs from the week after Labor Day to the week after Christmas, with each team playing 16 games and having one bye week. Following the conclusion of the regular season, six teams from each conference (four division winners and two wild card teams) advance to the playoffs, a single-elimination tournament culminating in the Super Bowl, played between the champions of the NFC and AFC.

​Today, the NFL has the highest average attendance (67,591) of any professional sports league in the world and is the most popular sports league in the United States. The Super Bowl is among the biggest club sporting events in the world and individual Super Bowl games account for many of the most watched television programs in American history, all occupying the Nielsen's Top 5 tally of the all-time most watched U.S. television broadcasts by 2015.

The NFL's executive officer is the commissioner, who has broad authority in governing the league.

Click on any of the following blue hyperlinks for further amplification: 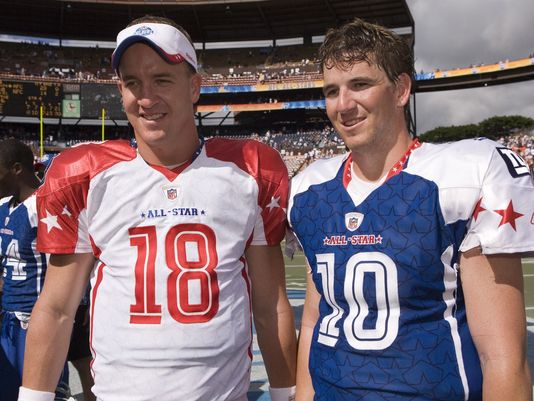 Considered to be one of the greatest quarterbacks of all time due to his numerous career achievements, he spent 14 seasons with the Colts and was a member of the Denver Broncos in his last four seasons. Manning played college football for the University of Tennessee, leading the Tennessee Volunteers to the 1997 SEC Championship in his senior season. He is the second son of former NFL quarterback Archie Manning and older brother of New York Giants quarterback Eli Manning (see below).

Manning was selected by the Colts as the first overall pick in the 1998 NFL Draft. From 1998 to 2010, he improved the fortunes of the struggling Colts franchise and helped transform them into consistent playoff contenders.

During his tenure as starting quarterback, Manning led the team to eight division championships, two AFC championships, and one Super Bowl title, the franchise's first in over three decades, as well as their first since relocating to Indianapolis.

After undergoing neck surgery that forced him to miss the entire 2011 season, Manning was released by the Colts and signed with the Broncos. Serving as the team's starting quarterback from 2012 to 2015, he contributed to the Broncos reaching the top of their division each year and his playing career concluded with a victory in Super Bowl 50.

Manning was the oldest quarterback to start in and win a Super Bowl until Tom Brady surpassed him by winning a Super Bowl at 41.

During a 2009 Monday Night Football game, Manning received the nickname "The Sheriff" from color commentator Jon Gruden due to his tendency to audible prior to the snap, and he was one of the most recognizable and parodied players in the NFL. Teams led by Manning typically utilized the hurry-up offense in place of the standard huddle.

Elisha ("Eli") Nelson Manning IV (born January 3, 1981) is an American football quarterback for the New York Giants of the National Football League (NFL). He played college football at the University of Mississippi from 2000 to 2003. He was drafted as the first overall pick in the 2004 NFL Draft by the San Diego Chargers and was immediately traded to the Giants who in return gave up a package, highlighted by fourth overall selection Philip Rivers.

Manning holds Giants franchise records for most passing yards, touchdown passes, and completed passes in a career. In 2012, in a 41–34 win over the Tampa Bay Buccaneers, he threw for 510 yards, 3 yards short of Phil Simms' record of 513. He led the Giants to victory in Super Bowls XLII and XLVI, defeating the New England Patriots in both games.

Manning started 210 straight games from 2004 to 2017, the second-longest consecutive starts streak by a quarterback in NFL history. He is the seventh all-time leader in passing yards and eighth in touchdowns.

Though lacking his brother's regular-season consistency and high-caliber performances, Manning is known for his two improbable Super Bowl-winning postseason runs in 2007 and 2011, in which he led an underdog Giants squad to Super Bowl victories twice against the Patriots 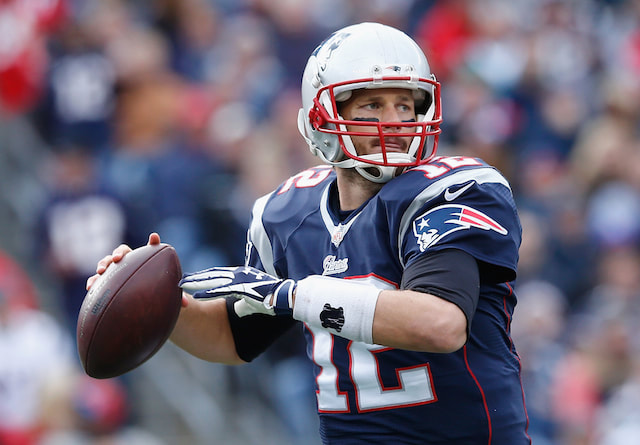 The New England Patriots are a professional American football team based in the Greater Boston area. The Patriots compete in the National Football League (NFL) as a member club of the league's American Football Conference (AFC) East division.

Founded in 1959 as the Boston Patriots, an original member of the American Football League (AFL), the team joined the NFL in the leagues' 1970 merger, then changed its name when it moved to Foxborough in 1971. The New England Patriots played their home games at Foxboro Stadium through 2001, then moved to Gillette Stadium at the start of the 2002 season. The Patriots' rivalry with the New York Jets is considered one of the most bitter rivalries in the NFL.

Since the arrival of head coach Bill Belichick and quarterback Tom Brady (below) in 2000, the Patriots have become one of the most successful teams in NFL history, claiming 16 AFC East titles as part of 18 consecutive winning seasons since 2001.

Brady is one of only two players to win five Super Bowls (the other being defensive player Charles Haley) and the only player to win them all playing for one team.

After playing college football for the University of Michigan, Brady was drafted by the Patriots in the sixth round of the 2000 NFL Draft. In Brady's 15 seasons as a starter, he has quarterbacked the Patriots to seven Super Bowl appearances, the most for any player in history.

Brady has been honored with four Super Bowl MVP awards (Super Bowl XXXVI, XXXVIII, XLIX, and LI), the most ever by a single player, has won two league MVP awards (2007 and 2010), has been selected to 12 Pro Bowls, and has led his team to more division titles (14) than any other quarterback in NFL history.

Brady has never had a losing season as a starting quarterback in the NFL. His combined regular-season and postseason wins are also the most of any quarterback in NFL history.

Because of his accomplishments and accolades, many analysts and sportswriters consider Brady to be among the greatest quarterbacks of all time. Due to his late draft selection, Brady is considered to be the biggest "steal" in the history of the NFL Draft.

For his alleged involvement in the highly publicized Deflategate football tampering scandal, Brady was suspended for the first four games of the 2016 NFL season.

Subsequently, Brady went on to win Super Bowl LI and Super Bowl MVP that season.
Brady has been married to Brazilian supermodel Gisele Bündchen since 2009.