Herein we will Cover the
Summer and Winter Olympics,
including the Paralympics
​
​

Olympic GamesPictured below: the Olympics symbol and the events and other topics to be covered on this Web Page

​The modern Olympic Games or Olympics  are leading international sporting events featuring summer and winter sports competitions in which thousands of athletes from around the world participate in a variety of competitions.

Their creation was inspired by the ancient Olympic Games (Ancient Greek: Ὀλυμπιακοί Ἀγῶνες), which were held in Olympia, Greece, from the 8th century BC to the 4th century AD.

Baron Pierre de Coubertin founded the International Olympic Committee (IOC) in 1894, leading to the first modern Games in Athens in 1896. The IOC is the governing body of the Olympic Movement, with the Olympic Charter defining its structure and authority.

The evolution of the Olympic Movement during the 20th and 21st centuries has resulted in several changes to the Olympic Games. Some of these adjustments include:
The Deaflympics and Special Olympics are also endorsed by the IOC. The IOC has had to adapt to a variety of economic, political, and technological advancements. The abuse of amateur rules by the Eastern Bloc nations prompted the IOC to shift away from pure amateurism, as envisioned by Coubertin, to allowing participation of professional athletes.

The growing importance of mass media created the issue of corporate sponsorship and commercialisation of the Games. World wars led to the cancellation of the 1916, 1940, and 1944 Games. Large-scale boycotts during the Cold War limited participation in the 1980 and 1984 Games, and the 2020 Games were postponed to 2021 due to the COVID-19 pandemic.

The Olympic Movement consists of international sports federations (IFs), National Olympic Committees (NOCs), and organizing committees for each specific Olympic Games. As the decision-making body, the IOC is responsible for choosing the host city for each Games, and organizes and funds the Games according to the Olympic Charter.

The IOC also determines the Olympic program, consisting of the sports to be contested at the Games. There are several Olympic rituals and symbols, such as the Olympic flag and torch, as well as the opening and closing ceremonies.

Over 14,000 athletes competed at the 2016 Summer Olympics and 2018 Winter Olympics combined, in 35 different sports and over 400 events. The first, second, and third-place finishers in each event receive Olympic medals: gold, silver, and bronze, respectively.

The Games have grown so much that nearly every nation is now represented. This growth has created numerous challenges and controversies, including boycotts, doping, bribery, and a terrorist attack in 1972. Every two years the Olympics and its media exposure provide athletes with the chance to attain national and sometimes international fame.

The Games also constitute an opportunity for the host city and country to showcase themselves to the world.

Click on any of the following blue hyperlinks for more about the Olympic Games:

Summer Olympic GamesPictured below: The world’s best athletes will meet during the summer of 2016 to compete at the Olympic Games in Rio. Learn what is done to detect doping in athletes, and more.

​The Summer Olympic Games (or the Games of the Olympiad, first held in 1896, is a major international multi-sport event normally held once every four years. The most recent Summer Olympics were held in Rio de Janeiro, Brazil.

The Summer Olympics has been hosted on five continents by a total of nineteen countries.

The Games have been held:
The IOC has selected Tokyo, Japan, for a second time, to host the 2020 Summer Olympics (due to take place in 2021).

The 2024 Summer Olympics will be held in Paris, France, for a third time, exactly one hundred years after the city's last Summer Olympics in 1924. The IOC has also selected Los Angeles, California, to host its third Summer Games in 2028.

The United States leads the all-time medal table for the Summer Olympics.

Click on any of the following blue hyperlinks for more about the Summer Olympics:​ 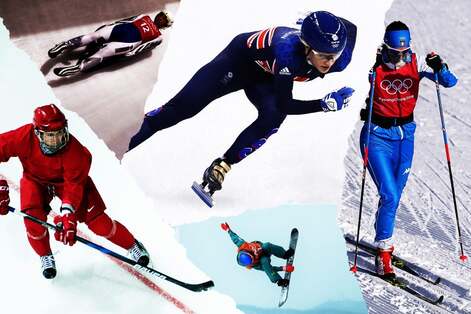 ​The Winter Olympic Games is a major international multi-sport event held once every four years for sports practiced on snow and ice.

Baron Pierre de Coubertin founded the International Olympic Committee (IOC) in 1894, leading to the first modern Summer Olympic Games in Athens, Greece in 1896. The IOC is the governing body of the Olympic Movement, with the Olympic Charter defining its structure and authority.

The Winter Olympic Games have evolved since their inception. Sports and disciplines have been added and some of them, such as Alpine skiing, luge, short track speed skating, freestyle skiing, skeleton, and snowboarding, have earned a permanent spot on the Olympic program.

Some others, including curling and bobsleigh, have been discontinued and later reintroduced; others have been permanently discontinued, such as military patrol, though the modern Winter Olympic sport of biathlon is descended from it. Still others, such as speed skiing, bandy and skijoring, were demonstration sports but never incorporated as Olympic sports.

The rise of television as a global medium for communication enhanced the profile of the Games. It generated income via the sale of broadcast rights and advertising, which has become lucrative for the IOC. This allowed outside interests, such as television companies and corporate sponsors, to exert influence.

Click on any of the following blue hyperlinks for more about the Winter Olympics:

International Olympic Committee * -- Tonya Harding Scandal
Pictured below: The IOC is a not-for-profit independent international organisation made up of volunteers. The IOC President presides over all its activities, while the IOC Session and Executive Board are responsible for taking the main decisions for the organisation. 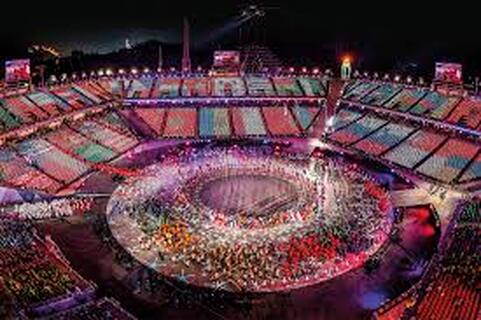 Founded by Pierre de Coubertin and Demetrios Vikelas in 1894, it is the authority responsible for organising the modern Summer and Winter Olympic Games.

​The IOC is the governing body of the National Olympic Committees (NOCs), which are the national constituents of the worldwide Olympic Movement. As of 2016, there are 206 NOCs officially recognised by the IOC. The current president of the IOC is Thomas Bach of Germany, who succeeded Jacques Rogge of Belgium in September 2013.

The stated mission of the IOC is to promote the Olympics throughout the world and to lead the Olympic Movement:
Click on any of the following blue hyperlinks for more about the International Olympic Committee (IOC):

James Cleveland "Jesse" Owens (September 12, 1913 – March 31, 1980) was an American track and field athlete and four-time Olympic gold medalist in the 1936 Games.
Owens specialized in the sprints and the long jump and was recognized in his lifetime as "perhaps the greatest and most famous athlete in track and field history". His achievement of setting three world records and tying another in less than an hour at the 1935 Big Ten track meet in Ann Arbor, Michigan, has been called "the greatest 45 minutes ever in sport" and has never been equaled.

At the 1936 Summer Olympics in Berlin, Germany, Owens won international fame with four gold medals: 100 meters, 200 meters, long jump, and 4 × 100 meter relay. He was the most successful athlete at the Games and, as a black man, was credited with "single-handedly crushing Hitler's myth of Aryan supremacy", although he "wasn't invited to the White House to shake hands with the President, either".

The Jesse Owens Award is USA Track and Field's highest accolade for the year's best track and field athlete. Owens was ranked by ESPN as the sixth greatest North American athlete of the twentieth century and the highest-ranked in his sport. In 1999 he was on the six man short list for the BBC's Sports Personality of the Century.

​
Michael Phelps: Greatest Olympian Ever! ​Pictured: Michael Phelps and some of the many Olympics gold medals he has earned.

Michael Fred Phelps II (born June 30, 1985) is an American former competitive swimmer and the most decorated Olympian of all time, with a total of 28 medals.

He has won 83 medals in major international long course competition, of which 66 gold were, 14 silver, and 3 bronze, spanning the Olympics, the World, and the Pan Pacific Championships.

Click on any of the following blue hyperlinks for more about Michael Phelps: 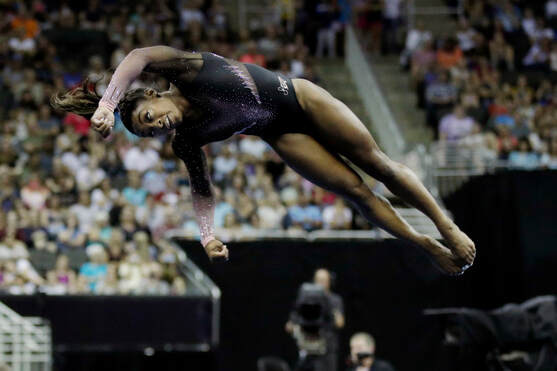 Simone Arianne Biles (born March 14, 1997) is an American artistic gymnast. With a total of 30 Olympic and World Championship medals, Biles is the most decorated American gymnast and the world's third most decorated gymnast, behind Belarus' Vitaly Scherbo (33 medals) and Russia's Larisa Latynina (32 medals).

At the 2016 Summer Olympics in Rio de Janeiro, Biles won individual gold medals in all-around, vault and floor; bronze in balance beam; and gold as part of the United States team, dubbed the "Final Five".

Click on any of the following blue hyperlinks for more about Simone Biles:​ 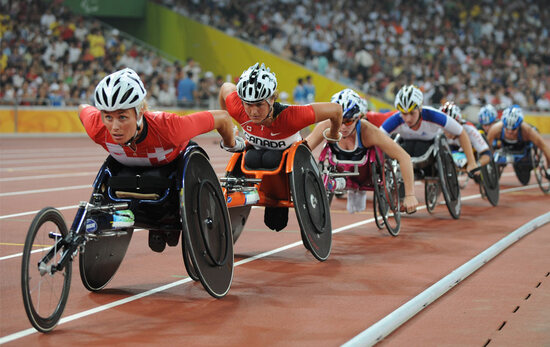 There are Winter and Summer Paralympic Games, which since the 1988 Summer Olympics in Seoul, South Korea, are held almost immediately following the respective Olympic Games. All Paralympic Games are governed by the International Paralympic Committee (IPC).

Paralympians strive for equal treatment with non-disabled Olympic athletes, but there is a large funding gap between Olympic and Paralympic athletes.

The Paralympic Games are organized in parallel with the Olympic Games, while the IOC-recognized Special Olympics World Games include athletes with intellectual disabilities, and the Deaflympics include deaf athletes.

Given the wide variety of disabilities that Paralympic athletes have, there are several categories in which the athletes compete. The allowable disabilities are broken down into ten eligible impairment types.

Click on any of the following blue hyperlinks for more about The Paralympic Games: 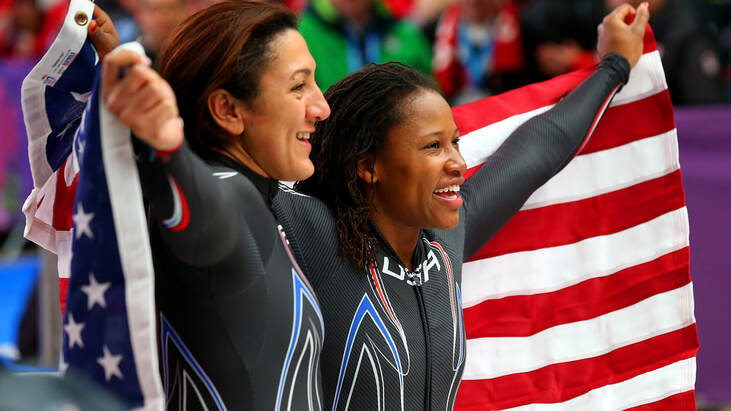 The United States at the Olympics:

​The United States of America (USA) has sent athletes to every celebration of the modern Olympic Games with the exception of the 1980 Summer Olympics, during which it led a boycott to protest the Soviet invasion of Afghanistan.

The US is ranked first in the all-time medal table even if all the incarnations of Russia and Germany are combined, leading the second-placed Russians by 402 gold and 917 total medals. These achievements are even more impressive considering the fact that the American Olympic team remains the only in the world to receive no government funding.

The United States at the Summer Olympics:

The United States at the Winter Olympics:

Click on any of the following blue hyperlinks for more about the United States at the Winter Olympics:

Miracle on Ice (1980 Winter Olympics)Pictured below:  Inside the Miracle on Ice: How Team USA defied the numbers to beat the Soviet Union at the 1980 Olympics 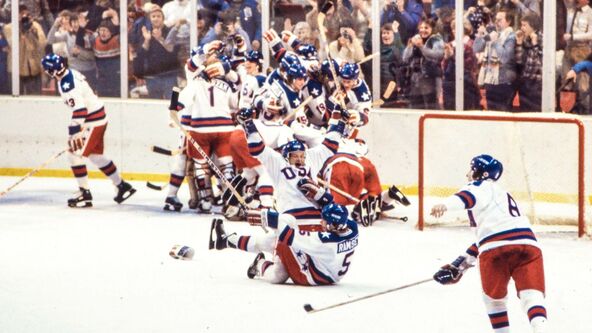 ​The "Miracle on Ice" was an ice hockey game during the 1980 Winter Olympics in Lake Placid, New York. It was played between the hosting United States and the Soviet Union on February 22, 1980, during the medal round of the men's hockey tournament. Though the Soviet Union was a four-time defending gold medalist and heavily favored, the United States upset them and won 4–3.

The Soviet Union had won the gold medal in five of the six previous Winter Olympic Games, and they were the favorites to win once more in Lake Placid. The team consisted primarily of veteran players with significant experience in international play.

By contrast, none of the young players on the United States' team, led by head coach Herb Brooks, had any National Hockey League experience, and largely came from college hockey ranks. With only four players with minimal professional experience, the United States was the youngest team in the tournament and in U.S. national team history. In the group stage, both the Soviet and U.S. teams were unbeaten; the U.S. achieved surprising results, including a 2–2 draw against Sweden, and a 7–3 upset victory over second-place favorite Czechoslovakia.

For the first game in the medal round, the United States played the Soviets. Finishing the first period tied at 2–2, and the Soviets leading 3–2 following the second, the U.S. team scored two more goals to take their first lead midway in the third and final period, then held on and won 4–3.

The victory became one of the most iconic moments of the Games and in U.S. sports. Equally well-known was the television call of the final seconds of the game by Al Michaels for ABC, in which he declared: "Do you believe in miracles? YES!"

Click on any of the following blue hyperlinks for more about "The Miracle on Ice: