This Page Covers
Ice Hockey,
Whether Amateur or Pro (NHL), in the United States, Canada and Worldwide
​

Ice HockeyPictured below: NHL superstar roundtable: Can hockey players be anonymous? Who has the league's best flow? 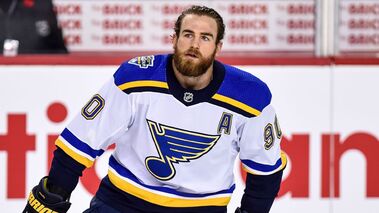 Ice hockey is a contact team sport played on ice, usually in a rink, in which two teams of skaters use their sticks to shoot a vulcanized rubber puck into their opponent's net to score goals. The sport is known to be fast-paced and physical, with teams usually fielding six players at a time: one goaltender, and five players who skate the span of the ice trying to control the puck and score goals against the opposing team.

Ice hockey is most popular in Canada, central and eastern Europe, the Nordic countries, Russia, and the United States. Ice hockey is the official national winter sport of Canada.

In addition, ice hockey is the most popular winter sport in Belarus, Croatia, the Czech Republic, Finland, Latvia, Russia, Slovakia, Sweden, and Switzerland.

The Kontinental Hockey League (KHL) is the highest league in Russia and much of Eastern Europe. The International Ice Hockey Federation (IIHF) is the formal governing body for international ice hockey, with the IIHF managing international tournaments and maintaining the IIHF World Ranking. Worldwide, there are ice hockey federations in 76 countries.

Ice hockey is believed to have evolved from simple stick and ball games played in the 18th and 19th centuries in the United Kingdom and elsewhere. These games were brought to North America and several similar winter games using informal rules were developed, such as shinny and ice polo.

The contemporary sport of ice hockey was developed in Canada, most notably in Montreal, where the first indoor hockey game was played on March 3, 1875. Some characteristics of that game, such as the length of the ice rink and the use of a puck, have been retained to this day. Amateur ice hockey leagues began in the 1880s, and professional ice hockey originated around 1900.

The Stanley Cup, emblematic of ice hockey club supremacy, was first awarded in 1893 to recognize the Canadian amateur champion and later became the championship trophy of the NHL. In the early 1900s, the Canadian rules were adopted by the Ligue Internationale de Hockey Sur Glace, the precursor of the IIHF and the sport was played for the first time at the Olympics during the 1920 Summer Olympics.

In international competitions, the national teams of six countries (the Big Six) predominate: Canada, Czech Republic, Finland, Russia, Sweden and the United States. Of the 69 medals awarded all-time in men's competition at the Olympics, only seven medals were not awarded to one of those countries (or two of their precursors, the Soviet Union for Russia, and Czechoslovakia for the Czech Republic).

In the annual Ice Hockey World Championships, 177 of 201 medals have been awarded to the six nations. Teams outside the Big Six have won only five medals in either competition since 1953.

World Cup games are played under NHL rules and not those of the IIHF, and the tournament occurs prior to the NHL pre-season, allowing for all NHL players to be available, unlike the World Championships, which overlaps with the NHL's Stanley Cup playoffs.

Furthermore, all 12 Women's Olympic and 36 IIHF World Women's Championship medals were awarded to one of these six countries. The Canadian national team or the United States national team have between them won every gold medal of either series

Click on any of the following blue hyperlinks for more about Ice Hockey:

The National Hockey League was organized on November 26, 1917, in Montreal, Quebec after the suspension of operations of its predecessor organization, the National Hockey Association (NHA), which had been founded in 1909 in Renfrew, Ontario.

The NHL immediately took the NHA's place as one of the leagues that contested for the Stanley Cup in an annual inter-league competition before a series of league mergers and folds left the NHL as the only league left competing for the Stanley Cup in 1926. At its inception, the NHL had four teams—all in Canada, thus the adjective "National" in the league's name.

The league expanded to the United States in 1924, when the Boston Bruins joined, and has since consisted of American and Canadian teams. After a labor-management dispute that led to the cancellation of the entire 2004–05 season, the league resumed play under a new collective agreement that included a salary cap. In 2009, the NHL enjoyed record highs in terms of sponsors, attendance, and television audiences.

The league draws many highly skilled players from all over the world and currently has players from approximately 20 different countries. Canadians have historically constituted the majority of the players in the league, with an increasing percentage of American and European players in recent seasons.

Click on any blue hyperlink below for further amplification: 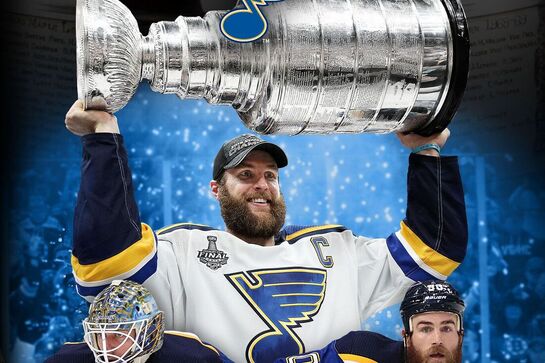 [The NHL's St. Louis Blues are my home-town hockey team, and experienced an incredible season in 2019, culminating in their winning the Stanley Cup in 2019, the first time in their 52 years of existence as a NHL Hockey Team!]

The St. Louis Blues are a professional ice hockey team based in St. Louis, Missouri. They are members of the Central Division of the Western Conference of the National Hockey League (NHL). The franchise was founded in 1967 as one of the six teams from the 1967 NHL expansion and is named after the W. C. Handy song "Saint Louis Blues". The Blues play their home games at the 19,150-seat Enterprise Center in downtown St. Louis, which has been their arena since moving from St. Louis Arena in 1994.

The Blues have qualified for the playoffs in all but nine of their 52 seasons, appeared in the Stanley Cup Finals four times, and won the Stanley Cup in 2019. Their 42 playoff appearances are the most for any NHL team outside of the Original Six, although the franchise struggled in the postseason throughout much of their history.

The Blues have a rivalry with the Chicago Blackhawks, with both teams having played in the same division since 1970. The San Antonio Rampage of the American Hockey League (AHL) and the Tulsa Oilers of the ECHL are the two minor league affiliates of the Blues.

Nicknamed "The Great One", Gretzky has been called "the greatest hockey player ever" by many sportswriters, players, and the league itself. He is the leading scorer in NHL history, with more goals and assists than any other player. He garnered more assists than any other player scored total points, and is the only NHL player to total over 200 points in one season – a feat he accomplished four times.

In addition, Gretzky tallied over 100 points in 16 professional seasons, 14 of them consecutive. At the time of his retirement in 1999, he held 61 NHL records: 40 regular-season records, 15 playoff records, and six All-Star records. As of 2015, he still holds 60 NHL records.

Born and raised in Brantford, Ontario, Canada, Gretzky honed his skills at a backyard rink and regularly played minor hockey at a level far above his peers. Despite his unimpressive stature, strength and speed, Gretzky's intelligence and reading of the game were unrivaled.

He was adept at dodging checks from opposing players, and consistently anticipated where the puck was going to be and executed the right move at the right time. Gretzky became known for setting up behind his opponent's net, an area that was nicknamed "Gretzky's office".

In 1978, Gretzky signed with the Indianapolis Racers of the World Hockey Association (WHA), where he briefly played before being traded to the Edmonton Oilers. When the WHA folded, the Oilers joined the NHL, where he established many scoring records and led his team to four Stanley Cup championships.

His trade to the Los Angeles Kings on August 9, 1988, had an immediate impact on the team's performance, eventually leading them to the 1993 Stanley Cup Finals, and he is credited with popularizing hockey in California.

Gretzky played briefly for the St. Louis Blues before finishing his career with the New York Rangers.

Gretzky captured nine Hart Trophies as the most valuable player, ten Art Ross Trophies for most points in a season, two Conn Smythe Trophies as playoff MVP, and five Lester B. Pearson Awards (now called the Ted Lindsay Award) for most outstanding player as judged by his peers. He won the Lady Byng Trophy for sportsmanship and performance five times, and often spoke out against fighting in hockey.

After his retirement in 1999, Gretzky was immediately inducted into the Hockey Hall of Fame, making him the most recent player to have the waiting period waived. The NHL retired his jersey number 99 league-wide, making him the only player to receive this honou. He was one of six players voted to the International Ice Hockey Federation's (IIHF) Centennial All-Star Team.

Gretzky became executive director for the Canadian national men's hockey team during the 2002 Winter Olympics, in which the team won a gold medal. In 2000, he became part-owner of the Phoenix Coyotes, and following the 2004–05 NHL lock-out he became the team's head coach. In 2004, he was inducted into the Ontario Sports Hall of Fame. In September 2009, following the franchise's bankruptcy, Gretzky resigned as coach and relinquished his ownership share. In October 2016, he became partner and vice-chairman of Oilers Entertainment Group.